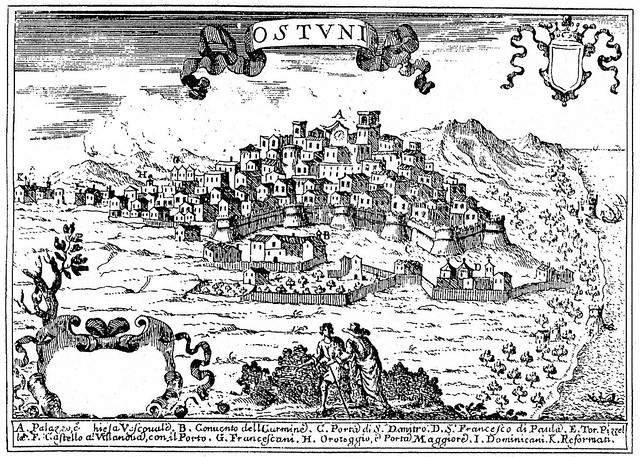 The ancient village of Ostuni, the rione Terra, is of medieval origin, grown around a castle built on the top of the hill; it was endowed with walls between the 13th and 14th centuries which could be accessed by four doors, two of which are still visible: Porta Nova and Porta San Demetrio. Subsequently, the districts around Piazza della Libertà and the Convent of San Francesco were annexed to the city walls with the construction of two other gates, the Porta di Juso and the Porta del Ponte.

The passage between the fifteenth and sixteenth centuries marks a period of expansion of the city that grew beyond the limits of the walls: the hill east of rione Terra called “lu Cienze” was initially occupied, in which the “Borgo Grande” developed, an area between the current Via Cavour, Via Roma and Via Imbriani.

Chianca Antica it is located in Via Roma, included in the Borgo Grande.

Chianca Bianca, it in via Leopardi has a more recent history: in fact it is located in the area called Orto di Padrengine whose land was used for the construction of houses around the end of 1700.

The difference in eras can also be seen in the different type of architecture:
Chianca Bianca has a sala, arcueve e cammarine con mezzanile e aschete, it means hall, alcove and little room with mezzanine and terrace, typical of Ostuni houses while Chianca Antica has a more irregular structure with a large hall and a terrace